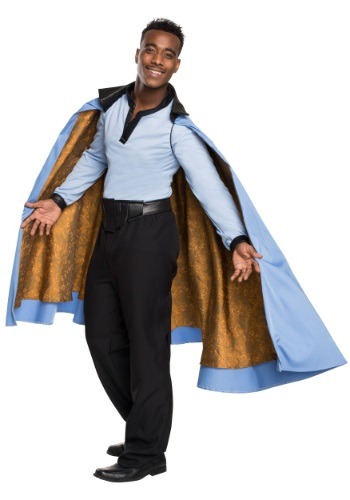 "...you're quite the smooth-talking smuggler." "Smuggler? Such a small word. I'm more of a...galactic entrepreneur.” ?Hera Syndulla and Lando Calrissian

Look, we know what you’re thinking—Lando Calrissian was the coolest, most smooth-talkin' guy in the galaxy. And we agree with you! But while we could tell you a bunch of stuff about Lando that you probably (obviously) already know from watching Star Wars, instead, we feel like we need to talk this opportunity to talk about the man behind the costume: Mr. Billy Dee Williams!

If you were alive during the late ‘70s and early ‘80s, then you already know what we’re gonna say, so feel free to slip your vinyl copy of “Let’s Misbehave” on the record player, pop a top on a Colt 45, spray some Undeniable by Billy Dee Williams for Avon perfume or cologne on your thick, finely-made sweater, and just sit back and let the velvet magic of Billy Dee take you away to another time and place. For the rest of us, here’s a thing that’s probably going to blow your mind: Billy Dee Williams was basically the first Kardashian. Not technically, as in blood-relation, but in his time, Billy Dee was famous for knowing exactly how to take his handsome, debonair image and parlay it into a profitable empire of movies, TV, music, video games, and product endorsements. The dude even did some fine art back in the day!

Which is all to say: That is a man who knows how to pull off a cape! Even in the midst of a cast of incredibly fascinating characters, Billy Dee made Lando stand out as a fan favorite thanks to his memorable presence and elegant costume. The best part? You have some of that smooth operator swagger for yourself with this officially licensed Lando Calrissian Grand Heritage Men's Costume! The fully lined, elegant gold floral patterned cape will have you looking like a boss, while the faux leather accents and iconic on-screen styling of the shirt, pants, and cape combination will have everyone stepping back and stealing your favorite line: “And who might you be?”

£131.99
Item # RU810964 | Write A Review
Items Included
Product Highlights
Size Chart
STXL
Inches Centimeters
Costume Sizing Tips
Product Description
Questions & Answers
There are no questions for this item yet. Be the first to ask a question!
Ask a Question
Reviews Write A Review