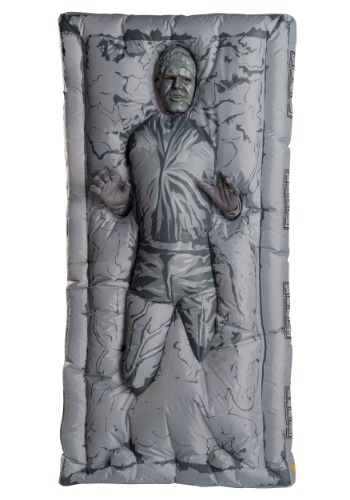 Welp. We thought everything was gonna be alright when we landed in the Cloud City, but it turns out Darth Vader beat us there. How'd that happen!? Well, things got a little worse, too, now you're about to be frozen in carbonite. Well, as far as sagas go, we guess there's gonna be some low points in the story!

You don't have to be down in the dumps when you get frozen in carbonite. Cause we've got a way you can still party! Just slip on this Adult Inflatable Han Solo Carbonite Costume, and you'll look like the hero frozen in a carbonite block. And the "freezing" is only a costume effect, so you're still able to move around. It even comes with a mask and gloves to complete the effect!

This Adult Inflatable Han Solo Carbonite Costume is Star Wars and Disney officially licensed. The costume jumpsuit secures with a hook and loop closure, and inflates to rectangular carbonite block proportions. The mask and gloves are separate pieces, in carbonite gray to complete the costume effect. The battery operated fan secures to your pocket or waist.

Costumes and gifts and more

We're all about fun here at FUN.com, so you bet we're fully stocked with all kinds of Star Wars stuff. Pick out a costume for Halloween, collect your favorite toys, or pick up cool decor to show off your fandom. Whatever kind of fan you are, FUN.com has got your back. But especially so if you're a Star Wars fan!

£87.99
Item # RU821069 | Write A Review
Items Included
Product Highlights
Size Chart
ST
Inches Centimeters
Costume Sizing Tips
Product Description
Questions & Answers
There are no questions for this item yet. Be the first to ask a question!
Ask a Question
Reviews Write A Review