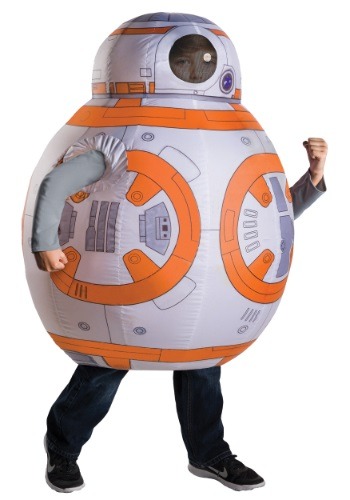 So how exactly does BB-8 work? We've been trying to figure it out ever since Star Wars: The Force Awakens came out, and we still don't have the answers! How he moves around without breaking into two pieces is clearly a modern marvel, and a technological mystery that may never be solved. Unless, of course, you help us out. See, we have this wild theory that the riddle might be solved if only someone could become BB-8. We would totally do it, but sadly, we're just a little too big (and probably too old) for such an experiment. You aren't, though! So if you're willing to become the coolest droid since R2D2 (for science, of course), we invite you to wear this awesome Star Wars Inflatable BB-8 Costume for Kids!

While it may not reveal the technological riddles behind the way BB-8 moves and works, this officially licensed, inflatable costume is a truly unique way for your kid to become one of the most memorable Force Awakens characters. It allows them to step inside the adorable astromech droid and see things from BB-8's point of view. The best part is, it looks amazing but doesn't sacrifice comfort: the costume comes with a battery-operated fan that assures your kid will stay cool the whole time they're wearing it. Because, as we all know, it gets quite hot on the planet Jakku... and when you're trick-or-treating, too!

This awesome outfit is an absolute must for your little Star Wars fan. And if you want to make it a group costume with friends or family, be sure to check out the rest of our Force Awakens suits!