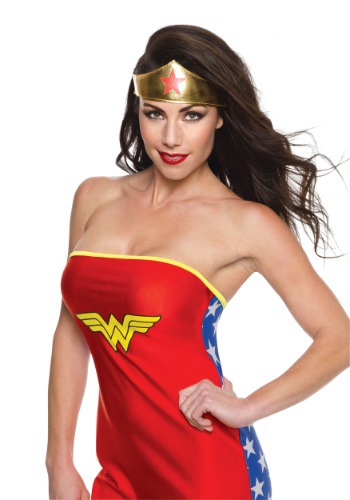 Here’s the thing about being a superhero:  people tend to look at you as though you are royalty or a deity of some kind.  That, of course, can be a rough thing to live up to.  Some have to spend their entire lives trying to convince folks that, no, they are definitely not a queen of anything and that they were all born just like everyone else!  Of course, there are a few out there that certainly couldn’t say that (especially when bound up by their own Lasso of Truth).

Wonder Woman, part deity and eventually full on Queen of the Amazons, is like none other.  And that’s why her heroic attire requires that little extra panache to show the world her proper title.  That can only be done by something as fine as this officially licensed Wonder Woman Tiara.  The polyfoam band is comfortable and regal as it shows off the iconic red star and golden shade.  Combine it with the Bracers of Hephaestus and her memorable armor and you’ll show everyone just what makes a Queen.