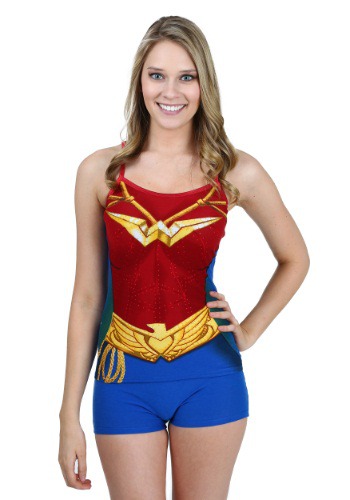 From a leather jacket to pants, skirts, and even a sword and shield, Diana Prince has rocked it all. Who says it’s a man’s world? I mean, numerous studies on gender inequality presumably, but don’t let that stop you from trying to change that sorry state of affairs! For some, like Diana Prince, feminism means showing some skin guilt-free. This adjustable strap cami top is styled to look like the Princess of Themyscira’s iconic red, blue, and gold costume.

While it might not look like something the ancient Greeks you know from Troy and 300 would wear, Wonder Woman’s getup really is a traditional Themysciran warrior’s armor. That’s not the red, white, and blue of the star-spangled stripes––it’s white stars on a blue field of night, and red for the hunter’s moon! And that’s not a set of double-Ws on her chest––it’s the goddess Athena’s eagle symbol. Of course. And Superman doesn’t have an S on his chest, it’s the serpentine symbol of the house of El. What line are they gonna feed us next, that Batman doesn’t have a bat on his chest? It’s your costume, and you can explain it however you like.

Wonder Woman has never been afraid to accessorize with her costume, and neither should you. This golden lasso is only printed on, but it should still instill fear in your dastardly foes! Get our Batman Costume Cami and Short Set and Superman Sequin Corset for your friends and rep the Justice League’s entire trinity of leadership! What’s cooler on a day at the beach than expressing your love of all things DC Comics?

£19.99
Item # UGWB085369  |  Write Review
Sale - Save 31%
Sign Up to be Notified When Your Size Is Available
Items Included
Product Highlights
Product Description
Recommended Products
You May Also Like These
Product Reviews Write A Review