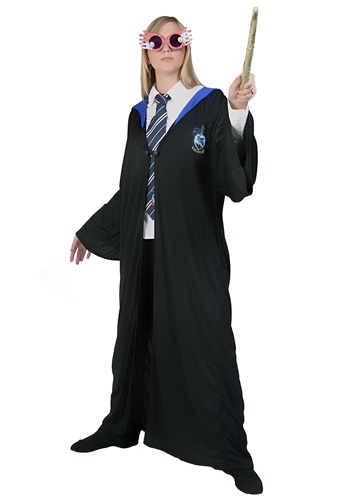 Her nickname might be “Loony Lovegood,” but we all know that there’s way more to Luna Lovegood than her Spectrespecs or how she tends to read magazines upside-down. There was the time she rescued Harry from underneath the invisibility cloak on the Hogwart’s Express while searching for Wrackspurts, and the time she helped save her friends from Death Eaters. She’s not the first person you think of when you think of Harry Potter’s universe (since that would be, by definition, Harry Potter), but she’s a crucial part of Harry’s inner circle of friends. After all, just remember how he and Ginny named one of their kids after her!

Yes, Luna is infinitely cooler than most students at Hogwarts give her credit for, and so it’s not surprising that you want to dress up like her for your next costume party.The place to start, obviously, is with our Women’s Luna Lovegood Robe. We suppose you could try to recreate her infamous wedding dress, but we’re not sure how easy it would be to stitch a dress out of rainbows and spangles, not to mention the tiara made out of silver unicorn horns. Plus, it was voted “Most Hideous Outfit of the Year,” according to Rita Skeeter’s

column, so maybe you just want to avoid that…

On the other hand, this Women’s Luna Lovegood Robe is both super simple and super classy. The officially licensed black hooded robe comes with a printed Ravenclaw symbol on the chest and fastens together with a clasp on front. The other accessories, like those awesome Spectrespecs, are sold separately. But hey, at least you won’t need to buy any shoes!