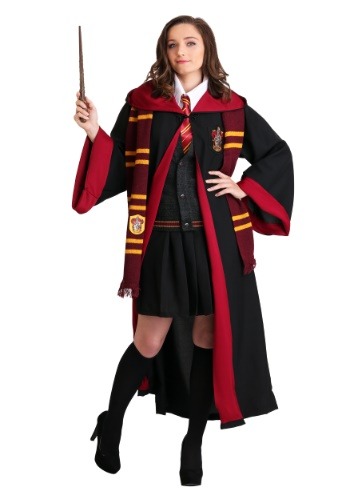 You know, for someone that's well known as a goody two shoes, Hermione breaks a whole lot of rules! You could say her fate was sealed as soon as she made friends with Harry and Ron but we think that rebellious spirit is part of her character, no matter the circumstances. After all, the world is filled with injustice, something that Hermione just can't stand for!
While book smarts are easy to get, it's not often that people have street smarts as well. When it comes to the book part, our Gryffindor girl has got it down. And when Malfoy takes his jerk-like behavior to new heights she's not afraid to throw all that book learning aside and give him a quick knock in the kisser. It's such a satisfying moment that, years later, it's still making the rounds as an internet meme. She works at everything she does from the house elf protection group, S.P.E.W. (she could have chosen a better name) to the hunt for Voldemort's Horcruxes.

If you're dressing up as the smart and sassy Hermione for your next costumed event, this dressy ensemble will make you feel like you're ready to ace your O.W.L.s. The cardigan has red piping and has a deep "V" in front, perfect to show off the Gryffindor tie and it's paired with a black, pleated skirt. All you need now is Hermione's vine wood wand, those Death Eaters better watch out!