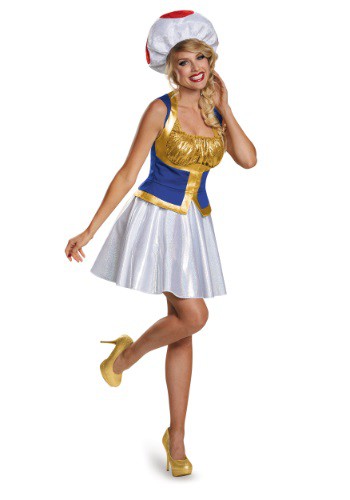 Luigi is known for his amazing jumping capabilities. Princess Peach is known for being able to float for long distances (and her impeccable style sense). Mario is known for being a jack of all trades. Toad? He’s known for having all the secret connections in The Mushroom Kingdom. Just take a look at any of his Mushroom Houses in Super Mario Bros 3. Toad’s little home is always packed with Super Mushrooms, Super Leaves and even the coveted P-Wing. We’re not sure what kind of black market connections he has going on, but it means he’s never caught without having all the best power-ups and we think that’s a way better power than being able to jump really high.

Are you known for your awesome connections? Maybe your power-up of choice is coffee and you know just the place to find the best cup of Joe in town! Well, if you’re great at finding the secret power-ups, then maybe you’ve got something in common with Toad from Super Mario Bros and maybe, just maybe, it’s about time you got the outfit to match your skills!

This womens Toad costume brings you a great look based on the Nintendo character. It comes with a white satin sleeveless dress with a gold top. It also comes with Toad’s blue vest, which fits with Hook and Loop fastener around the front. The final piece to the outfit is the mushroom cap hat. It’s made of asoft velour and is stuffed to give it that plump look. It fits with an elastic band around the edges. Once you have it on, you’ll just have to locate all of the power-ups to help you save The Mushroom Kingdom.