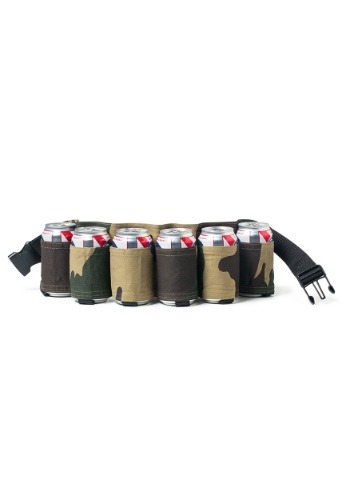 IT’S A JUNGLE OUT THERE

You must prepare for anything. When summer hits and your friend invites you to a party, there’s just no telling what could happen. It could be a backyard BBQ, filled with some boring people that you’ve never met before. All of your best buds could show up… and there might not be enough beers for everyone. Or, worst of all, they could be serving nothing but that one kind of beer that you absolutely hate. That’s why you need to gear up for war! You must treat every party like an untamed jungle and you must bring emergency rations.

Don’t worry, though. This handy Beer Belt: Camo Six Pack Holster makes sure that you’ll never be unprepared for the party.

The Beer Belt: Camo Six Pack Holster is a handy accessory that keeps you fully prepared for the party. It comes with an adjustable strap around the waist with a parachute-style clip buckle. It’s made of sturdy, camouflage canvas material, but that’s not even the best part. The belt has 6 individual can holsters, perfect for holding your favorite brew. It even holds soda cans if you’re trying to keep things cool during the summer.