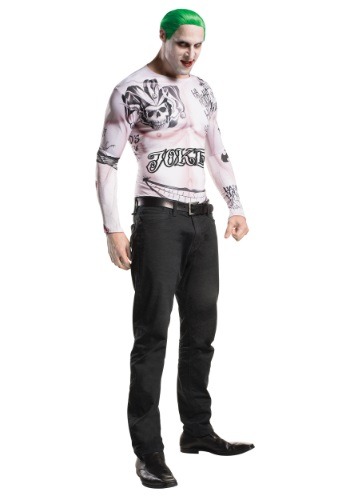 Why isn't the Joker running Gotham yet? He might have made some horrific choices but in the end, he's a pretty genius type of guy. He's been showing up in comics, television shows, and movies since Batman has been around, basically. None of his tricks grow stale because he's always coming up with new ones. We wouldn't peg him as the jovial sort but we are pretty curious how he got so witty. He must have some sort of charm, after all, Harley Quinn would follow him to the ends of the earth!

Joker has had quite a few looks in the past. We've liked him before but his look in Suicide Squad is wilder than ever! Gone are his fancy coats, now he's rawer than ever before with tattoos, green hair, and teeth caps. This costume includes a flesh-tone long-sleeved shirt with the intricate tattoos from the movie. You'll also get a bright green, slicked-back wig, a make-up kit to give yourself that defensive look without going through The Joker's trauma. You'll know how to get that look with an instruction pamphlet. So, you'll have plenty of time to play with your toys after applying your new look!