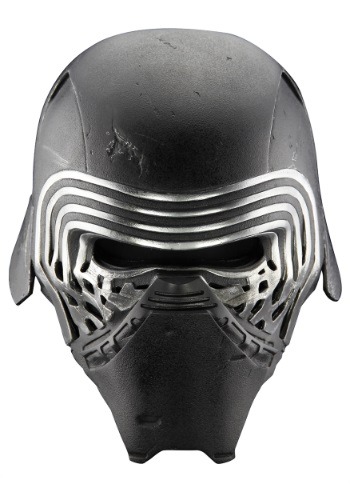 The Look of Fear

Inspiring fear across an entire galaxy requires a certain look. You know... the sort of look that lets enemies know that their fate is sealed. One that commands respect from every Stormtrooper. A look that cements you as the deadliest being in the galaxy. It's something that Darth Vader knew all about and it's why he's remembered as one of the most feared villains of all time. Count Dooku didn't get that memo, and it's probably why he wasn't able to attain control of the galaxy, like Vader eventually did. It's a good thing that Kylo Ren follows the footsteps of Darth Vader and not Count Dooku!

Well, the folks from Anovos wanted to capture the fear-inspiring nature of Kylo Ren's mask and they did a magnificent job when they made this officially licensed Star Wars mask.

The Star Wars Kylo Ren Helmet is a high-quality, collectible mask from Star Wars: The Force Awakens. The mask is constructed out of a sturdy fiberglass material and gets every little knick and dent just right. It even recreates battle damage seen in the movie. The interior of the mask features a foam lining, along with additional foam padding that can be attached to the inside to adjust the fit. The mash at the eyes allows for vision, so you can see the look of terror in the eyes of your subjects! It all combines for a look that truly makes this the cornerstone of any Star Wars collection.