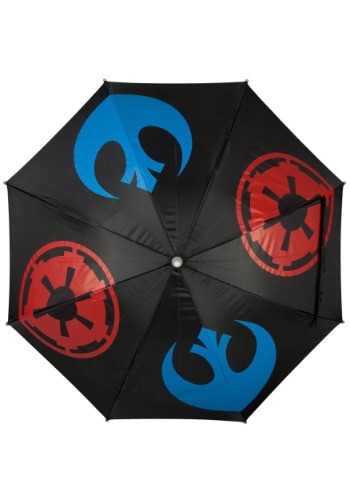 The Force Can’t Do Everything

The Force can’t protect you from everything. Sure, you can use it to push away some dangerous battle droids in the heat of battle. You can use it to pull a lightsaber to you from across the room. You can use it to predict your enemy’s movements during an intense duel. You can even use it to lift an X-Wing out of a swamp so you can dash off to Cloud City. But do you know what it can’t do? Keep you from getting wet during a rainstorm.

Let's just take a look at Obi-Wan’s little excursion to Kamino in Star Wars: Attack of the Clones. It was raining cats and dogs there and did the Force protect him? Nope. He just got soaked. Sometimes, you need to use a good old fashioned umbrella to protect yourself from the rain!

Just take a gander at this Star Wars Umbrella! The canopy opens to a 46-inch diameter to help keep you dry, even in Kamino level storms. The canopy has both Rebel Alliance and Empire symbols, but that’s not even the best part. The shaft has an LED flashlight bulb in the grip, allowing you to light up the tip and ribs to give the umbrella a nice glow. Even the Force has nothing on this handy umbrella!