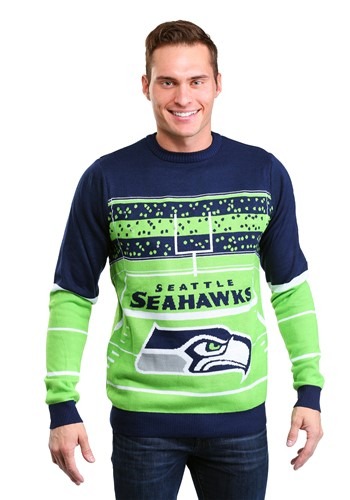 Do you face the same problem every year at your holiday get-togethers? You know the one we're talking about. The fact your friends and family have split allegiances in the NFC West, and that despite all the holiday goodwill, they can't come together to admit the obvious reality. That the Seahawks are, indeed, the best in the West!

Words can only take you so far, and when you're trying to convince Cardinals and Niners fans, they are probably going to fall on deaf ears. So, let's take a new approach to showing off which team is the tops. Let's have you rep your team with this Seattle Seahawks Light Up Sweater!

It will be hard to argue that the Seahawks aren't the coolest when you've got the multi-colored LEDs in this sweater lit up in a festive display. With knit Seahawks team logos and even a player's silhouette featured on the back, you can even do a great touchdown dance to help drive home the point. You might not change any minds, but with this Seahawks ugly Christmas Sweater, at least you're going to have the best sweater at the party!

£45.99
Item # FLSWTCNNFSTDLUSS | Write A Review
Sale - Save 40%
Sign Up To Be Notified When Your Size Is Available
Items Included
Product Highlights
Size Chart
SMLXL2X
Inches Centimeters
Product Description
Questions & Answers
There are no questions for this item yet. Be the first to ask a question!
Ask a Question
Reviews Write A Review