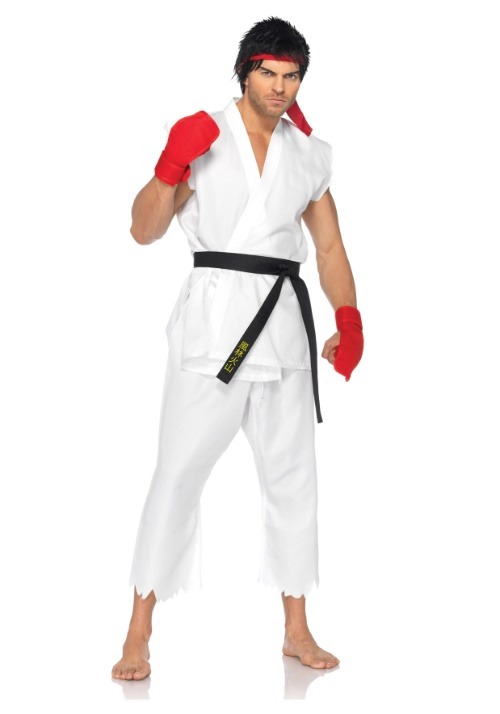 Do you ever wonder why Ryu, from Street Fighter, pursues martial arts so fiercely? His uppercut is strong enough to K.O. an elephant. The guy can already destroy a car with his bare hands. Oh, and did we mention that he can shoot a freakin’ blue energy wave from his fists? Yeah, he can do that too. If it were us, we’d just call it good after being able Haduken our opponents’ into oblivion, but he’s still globe-trotting the world, looking for ways to improve his martial arts game. Doesn’t it sort of make you want to get out there to improve your fighting moves?

Well, it’s time to turn that Hadu-can’t into a HadOUKen! This officially licensed Ryu costume will have you feeling ready to go a few rounds with any fighter from the roster of the Street Fighter series. The costume comes with a white gi top that ties on each side to provide a comfortable fit. The matching white pants have an elastic band, perfect for keeping them on your waist while you’re performing intense sidekicks. The black belt has yellow kanji writing on them. We’re told that the kanji have something to do with Sun Tzu’s Art of War. Of course, it comes with a red headband and matching gloves to finish the look.

Once you have it on, you’ll be one small step closer to performing the Hadouken for yourself. All you need to do is spend years training under a wise martial arts master like Gouken. (We’ll leave that part up to you.)