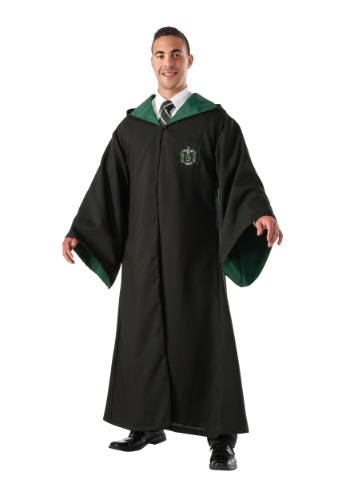 Does your ambition know no bounds? They say everybody wants to rule the world, or Tears for Fears did at least, but what about you? Are you good at thinking of outside-the-box solutions to problems? Have you always felt rules are for other people? If ambition, cunning, and a certain disregard for the rules seem to run in your blood, you might just be a Slytherin, the Hogwarts house that has birthed most of the wizarding world’s dark witches and wizards.

Hmm. This puts us in an awkward position. Do we sell robes to potential Death Eaters? We don’t discriminate as a policy, but what do we do about those who discriminate against others? (Like Muggles and Muggle-born witches and wizards?) Alright, alright, Slytherins aren’t all bad. Some of them came back with Professor Slughorn to defend Hogwarts from Voldemort. And Snape turned out to be alright in the end, even if he did it all because he couldn’t move on from his unrequited childhood crush. Even Harry’s son is eventually sorted into Slytherin. So not everyone who prefers dank dungeons to well-lit towers and slithering serpents to all things cuddly and feathery are necessarily evil. It just seems like most of them are. Prove the Slytherin-haters and judgers wrong by being a decidedly good wizard in this Replica Slytherin Robe.

It’s an officially licensed Harry Potter movie costume, made of 100 percent polyester poplin and satin fabrics, with a satin-lined poplin hood that fastens with a button at the front. Everyone will know what house you’re in from the embroidered Slytherin crest patch on the left breast.