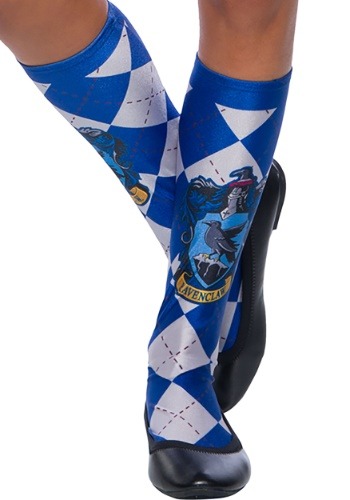 We sympathize with your plight; we would love nothing more than to have magic powers like Harry, Ron, and Hermione, but alas, we are only Muggles. Our urge to call ourselves witches became so strong we were compelled to get our hands on an officially licensed wand, with real phoenix feather core. We've been trying to do summoning spells for 48 hours straight, pointing the wand at inanimate objects shouting Accio book, Accio juice, Accio...something, but we summoned nothing and we ended up looking a little silly as a result.

Even though we can't perform spells like a true witch or wizard, we can still dress like one! Thankfully, we can at least feel like a magical being whenever we put our socks on. This mundane task no longer feels like a chore. Now it's like we're stepping into our magic capabilities one foot at a time, thanks to these Ravenclaw socks.

Officially licensed and officially awesome, these Harry Potter-themed Ravenclaw socks have just the right amount of stretch so they're comfortable and fun to wear. They feature the traditional Ravenclaw colors, a scholarly argyle print, and the Ravenclaw House crest.

Don't worry if your spells aren't yielding results. Just wear a complete Ravenclaw themed outfit to instantly feel magical. Pair these socks with the matching skirt, scarf, and tie for a complete outfit. You may not be able to open a locked door with a flick of the wrist but at least you'll look like you can.