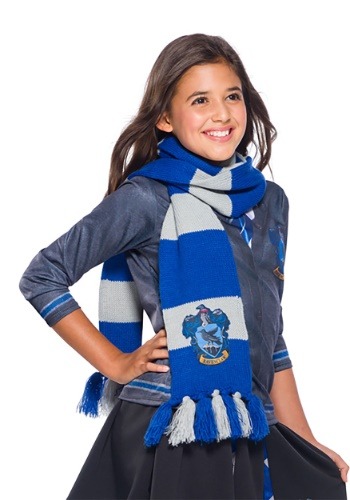 We don't mean to start a fight or anything but we don't think that Ravenclaws get enough credit. The sharp-witted members of this house were awesome from the very beginning. Just look at Rowena Ravenclaw. She designed the architecture of Hogwarts, imagine working with appearing rooms and moving staircases while designing the interior of a giant castle-like school. Then there is the wise beyond her years, Luna Lovegood. She knows the meaning of friendship better than most people, oddly knowing what to say in the hardest times at Hogwarts. That's a kind of wit we wouldn't mind having around! So if you're ready to show your alliance to Ravenclaw to the world then you're going to need the right accessories!

This winter scarf is perfect for your stay at Hogwarts. Everyone knows it gets chilly in the stone halls! The scarf is tufted at each end with full blue and white tassels. The scarf is detailed with the instantly recognizable Ravenclaw shield. It looks awesome with the rest of our Ravenclaw accessories such as the skirt and sweater that are shown here. So you'll be ready to head to the hallowed halls of Hogwarts as soon as that letter gets delivered by owl!

Hogwarts is a super cozy place to live, despite the drafty halls that are heated only with fires and magic. The Ravenclaw house is quite airy with a giant fireplace and tall windows that are sure to inspire some seriously smart thinking. Just think about how nice it would be to wrap yourself in a scarf before heading into chilly corners of the library. Or hey, sick of studying for your O.W.L.s? You'll be ready to head out to Hogsmeade for a sip of Butterbeer at The Three Broomsticks even if it's snowy outside. We think you're ready to head to Platform 9 3/4!