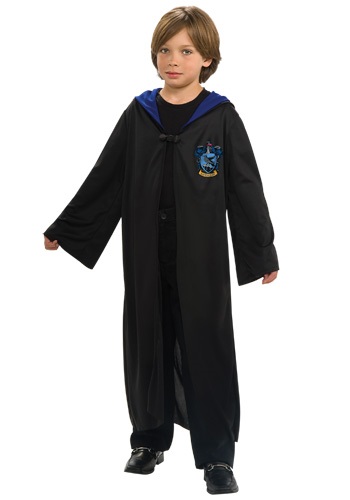 Your kid is a Harry Potter fanatic. You could conjure up almost any Potter factoid, and your little one would be able to recite it, like an encyclopedia. But...there must be something going on, you think. Isn’t it weird that they don’t seem to want to be in Gryffindor like the rest of the world?

That’s not weird; that’s a little Ravenclaw you have on your hands! Not every kid in the magical world wants to answer to Nearly Headless Nick and Professor McGonagall for seven years. Your little one would prefer to be haunted by the Grey Lady and be known for their intelligence, wisdom, and wit. It’s actually no surprise to us that your little wizard has self-sorted into Ravenclaw, as that house is often prized for its originality of ideas.

So don’t panic and send your kid up to Madame Pomfrey; nothing is wrong with them. Instead, praise them for not following the crowd and thinking for themselves by gifting them this Ravenclaw Kid’s Robe. It’s got a blue-lined hood to match the house crest on the chest. You could send it via owl to be opened at the house table and make your kid the star of the day, instead of that pesky Gryffindor crowd.