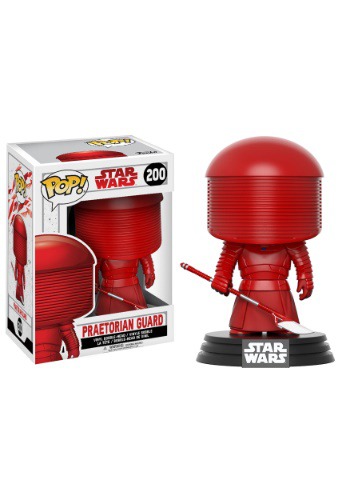 What do the Praetorian Guard do when Snoke doesn’t need any protection? In Star Wars: The Last Jedi, Supreme Leader Snoke is a master of the Dark Side and Kylo Ren is his personal lackey, so he’s probably not in danger very often. Surely, Kylo Ren would never do anything to harm Snoke!

So, what do they do in their spare time? Perhaps they spend hours on end playing Sabacc, gambling away their salaries on games of Sabacc in the break room while sipping on blue milk. Maybe they like to watch some pod-racing on their big-screen holodisplay. They could even be practicing their martial arts skills, just in case Rey comes around looking for a fight! Or maybe, just maybe, they like to stand stoically while they ponder intricate theories on where Snoke came from…

Well, this Star Wars Pop! Praetorian Guard vinyl figure does the latter. The little figure combines the cuteness of Funko with the intimidating look from The Last Jedi and his favorite activity is standing in place with the rest of your Star Wars Pop! collection. We’re not sure what goes through his mind, but he’s in need of a new job after what happened in the Throne Room.

Don’t set this guy next to Rey and Kylo Ren. He has a serious grudge against those two for messing with his employer!