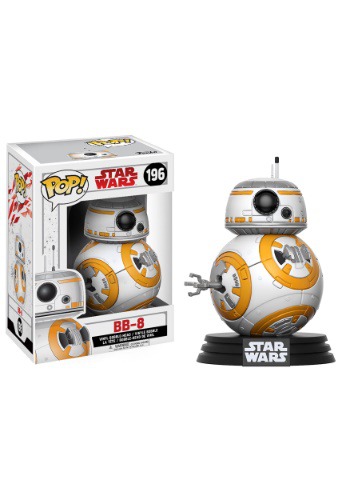 What? No Droids Allowed?

It’s hard to imagine the Star Wars universe without droids. Sure, those fiends in the Mos Eisley Cantina don’t seem to like them much, but what do they know anyways? C-3PO acts as a universal translator and can even speak to moisture vaporators. R2-D2 is a little boss when it comes to unlocking security doors in places like the Death Star. And, of course, BB-8, everyone’s newest favorite droid, can fix an X-Wing while it’s making an assault run on a Star Destroyer. What does has that shady bartender from the cantina ever done for anyone? Well, the good news is that you don't have to listen to that cranky bartender and you can have a droid of your own! You can have a tiny BB-8 when you get this adorable Funko vinyl figure.

This Pop! Star Wars BB-8 bobble head is a designed after the little droid’s appearance in The Last Jedi movie. His head wiggles to and fro when you place him with the rest of your collection and his molded body even has a little mechanical arm coming out of the side of him. He comes with a little black base that reads “Star Wars” on the front. He’s 100% ready to join your collection!

This little Funko figure makes for the perfect gift to any Star Wars fan, or the finishing touch to any Pop! vinyl collection.