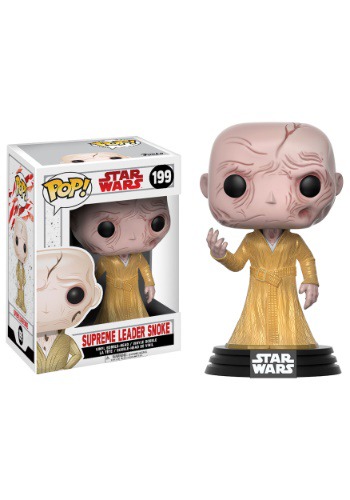 Star Wars villains always know how to dress. Darth Vader rocked a luxurious black cape and epaulet-style armor on his shoulders. Palpatine used to wear some pretty fancy robes during his days in the Senate. And Jabba… well, Jabba was a giant alien slug who didn’t really wear clothes, so maybe he’s not a great example. Snoke, however, knocks it out of the park!

In Star Wars: The Last Jedi, Supreme Leader Snoke sports a gold robe that looks fit for some kind of billionaire movie star. He’s not content with the sulky black colors of some of those other evil beings in the galaxy. He wants to shine and shine he does! Now, you add his flashy villainous style with this Pop! Star Wars Supreme Leader Snoke vinyl figure.

This officially licensed Star Wars Pop! is one of Funko’s fine collectible figures and it makes the creepy villain look a little bit more adorable. He’s a bobble head style, so you can place him with the rest of your collection and watch as his head jiggles around. He comes with a small base and he’s rocking his ultra-cool gold robes. Just make sure you place him next to Kylo Ren so he can keep an eye on him!