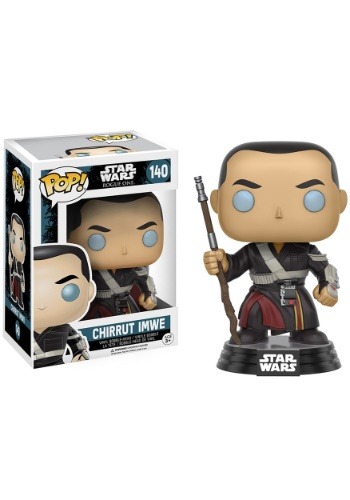 Who’d have thought that a totally bodacious monk would be hanging out in the slums of Jedha? Not us, that’s for sure! Lo and behold though, this Force sensitive monk just strolls into the middle of things and lays the beatdown on tons of Imperial Stormtroopers. That’s when we decided that Chirrut Imwe, Donnie Yen’s character in Rogue One: A Star Wars Story, is now one of our characters from the galaxy far, far away. It turns out that the folks at Funko agree with us, since they’ve immortalized the character with this adorable POP vinyl!

This licensed Chirrut Imwe POP vinyl is an adorable little bobblehead figure that is ready to throw down with a whole army of Stormtroopers! He comes straight from the Rogue One movie and he pairs perfectly with your Baze Malbus figure. You can use them to recreate their epic stand against the baddies, or just set him up by your desk solo to follow the ways of the Force.