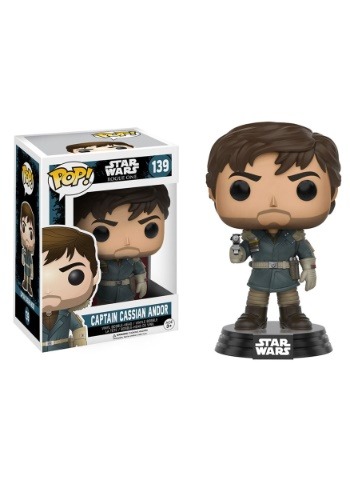 Rebel Alliance fighter, Cassian Andor, is one tough cookie who knows how to get the job done. Why, he’ll steal secret plans for the Death Star, he’ll blast apart Stormtroopers and he’ll even play a rousing game of hop-scotch with local kids from Jedha if it will help the Rebellion out even just a bit. That’s the kind of guy he is and that’s the kind of POP vinyl this little Funko figure version of him is.

Based on the character from Rogue One, this Star Wars Captain Cassian POP vinyl figure shrinks down all of the his manly features into a cute little collectible. This figure comes holding his blaster pistol and he even has a rugged 5 o’ clock shadow! You can place him with the rest of your Rogue One crew, or send him on a solo mission to stand on your desk. He’s ready for any order you give him!