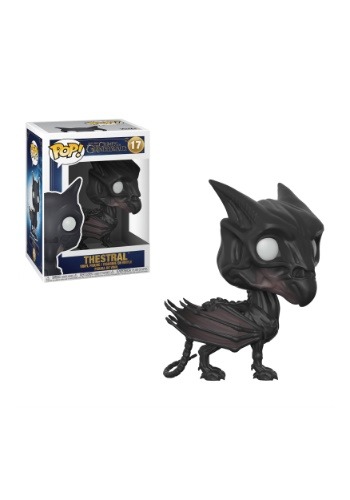 No one wants tragedy to be part of their lives. But certain things come to light once someone witnesses an end of life transition. Once Harry Potter saw his godfather pass at the hands of the Death Eaters, he was able to witness the once invisible "horses" that carry the student coaches to Gryfindor castle. Poor Luna has been able to see them all along while the other students thought she was just being as strange as usual. Their appearance might be sad, dark, and a little scary. But Thestrals are still there and they're still magical.

Whether you're collecting all the magical beasts or you love the beauty of these dark creatures, you're sure to appreciate the Pop vinyl version of these creatures. Some how this company still managed to make them cute! At four inches tall it stands by itself and is sure to fascinate any Wizarding World fans

Thestrals aren't bad creatures, they're simply fantastic in a whole different way. We're sure Newt wouldn't hesitate to show them his trade mark animal understanding. There's something about the world of magic that makes tragedy a little more beautiful. Embrace all sides of the Wizarding World with this vinyl figure that'll really make your collection pop!

£10.99
Item # FN32753 | Write A Review
Items Included
Product Highlights
Size Chart
ST
Inches Centimeters
Product Description
Questions & Answers
There are no questions for this item yet. Be the first to ask a question!
Ask a Question
Reviews Write A Review