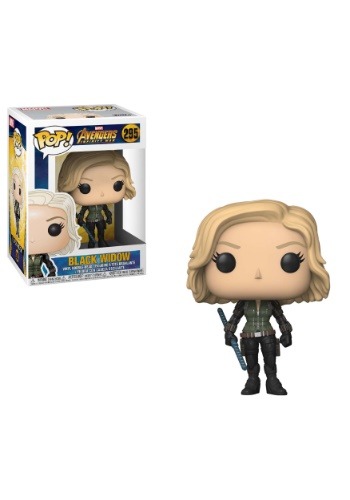 She’s Seen it All

Natasha Romanoff has been through quite a lot since her introduction to the Marvel Cinematic Universe. Remember when Black Widow first broke onto the scene in Iron Man 2? She started by being Iron Man’s personal babysitter, doing backflips and taking down thugs with acrobatic precision. Then she beat up hordes of aliens during the Avengers battle in New York City. After that, she hung out with Captain America and traded blows with Winter Soldier for a bit. She even fought against Ultron and his robot army.

Yes, aliens, robots, politicians, and even a rampaging Hulk are no problem for her and she’s back to give Thanos a butt-kicking of a lifetime. She’s even sporting a new blonde hairstyle for the occasion.

Now, you can have the deadly S.H.I.E.L.D. Agent in Funko form! This Pop! Marvel: Avengers Black Widow vinyl figure comes from the latest installment of the Marvel Cinematic Universe, Avengers: Infinity War. She comes with her rad new blonde hair, a nice green flak jacket, and a butt-kicking stance. Oh, and did we mention that she’s holding a big baton that she plans on using to wallop some bad guys? She does.

Just add this Black Widow Pop! figure to your collection to complete your team of Funko Avengers figures!