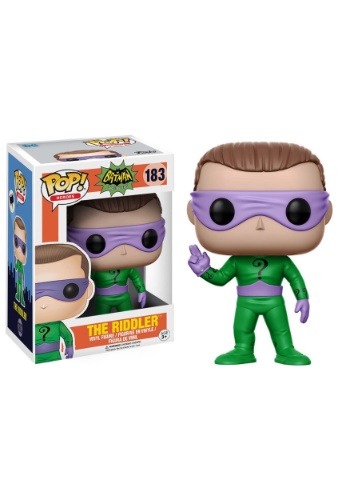 Of course you have! You're all about those vexing questions, and chances are, you're probably all about the villain who was notoriously associated with them as well. We are also, obviously, talking about The Riddler. And, to get just a little more specific, we're talking about the Riddler from the 1966 Batman Series. Yup! Now that's a Riddler that we won't soon forget.

He challenged Batman and Robin with those zany riddles, and while Batman was usually able to figure them all, we still think he's a great villain to celebrate. So, why not get yourself this Pop! DC Heroes Riddler? We think it's a great selection, no matter if you're all about the retro appeal, or just collect everything DC Comics.

A Riddler from Funko

This Riddler comes from a fresh new vinyl mold over at the Funko studios, and it's done in that classic Pop! style that we love and adore. This figure's depicted just like the character as portrayed by actor Frank Gorshin way back in the day, and it's also got the signature cuteness of the Pop! line, too. Standing 3 and 3/4 inches tall, it'll come to you packaged in a window display box, so you can collect it just the way you like!

£10.99
Item # FN13628 | Write A Review
Sign Up To Be Notified When Your Size Is Available
Items Included
Product Highlights
Size Chart
ST
Inches Centimeters
Product Description
Questions & Answers
There are no questions for this item yet. Be the first to ask a question!
Ask a Question
Reviews Write A Review