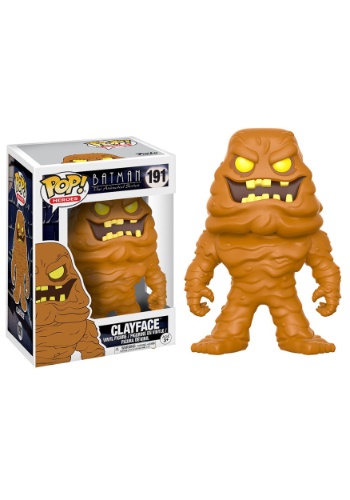 From Thespian to Thug

Matt Hagen’s story is a standard one. Once a successful actor, he became disfigured in a horrible accident. Of course, the movie industry would no longer hire the top-billed actor because of his new look, driving him to use experimental facial cream to allow him to restore his looks. It ALSO gave him some shapeshifting abilities and a terrible addiction to the medical cream. One might say that the cream turns him into a true monster, finally taking on the name Clayface… wait a second! That isn’t a standard tale at all, but stuff like that happens in Gotham City all the time.

We can relate to Clayface. This world is so focused on skin-deep beauty, that we can’t really blame him for resorting to such extreme measures. We can’t say that we agree with all of his crime sprees, but it certainly did make for some entertaining episodes of Batman: The Animated Series and we’d like to pay homage to him!

This Pop! Clayface vinyl figure gives you one of Batman’s greatest foes, except he’s a little bit smaller and a little bit cuter. He has that fantastic Funko touch and he’ll go great with any Batman collection. Just make sure to keep a jar of “NewYou” ready for him!

£8.99
Item # FN13643 | Write A Review
Sign Up To Be Notified When Your Size Is Available
Items Included
Product Highlights
Size Chart
ST
Inches Centimeters
Product Description
Questions & Answers
There are no questions for this item yet. Be the first to ask a question!
Ask a Question
Reviews Write A Review