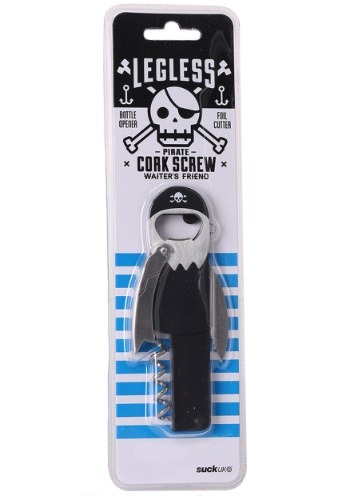 Life on the seas was rough for pirates. You'd think it wouldn't be so bad. It was sunny, there was nothing but horizon ahead. But as you know, you can totally have too much of a good thing. Those handkerchiefs only went so far to prevent some serious skin damage. Then you've got the sharks. Why live life on the Caribbean sea if you can't cool off in the water without worrying about losing a leg to a shark that's looking for an afternoon snack. So we can't blame pirates for liking their grog! Unlike pirates, you don't have to go grabbing a cork out of a bottle with your teeth. Instead, you can use this handy-dandy pirate corkscrew.  It'll be the most reliable matie in your galley!

Both adorable and useful this "waiter's friend" bottle opener will be the perfect gift for those taking off on long voyages. The bottle opener top hints at a bearded pirate with an eye patch while the buckaroo's arms are represented with a fulcrum and foil opener. Oh, and let's not forget the corkscrew itself, it makes the opener look like it's lost a leg to one of those sharks we mentioned early. So, don't blame this mate for being a little salty, he's still on top of his game!

Yo Ho Ho and a Bottle of Rum

Whether you're opening an ancient bottle of rum that just floated on the beach where you were recently marrooned or you're simply playing host at a nautically themed party, this little guy is glad to be at your service. After all his time at sea, he's finally doing what he does best, opening bottles of brew!