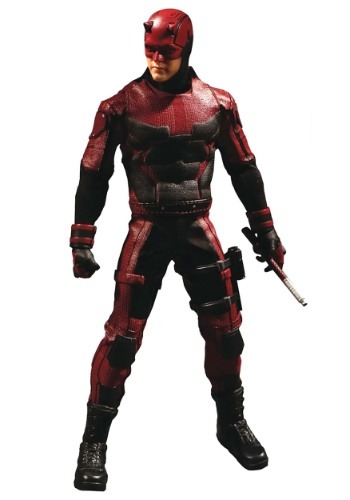 Matt Murdock seems like just your average guy. Well, except that he's blind. And that he has crazy good hearing. And of course, there's the whole thing about being an amazing lawyer. Other than that, he seems pretty average. At least, that's what he wants you to think. Because, at night, Matt wanders the street doling out justice as Daredevil. Yeah, apparently his hearing is like super good and he can hear every move his opponents make. So the reality is, Matt Murdock and his alter-ego Daredevil are really anything but average. Which is why Daredevil is deserving of his own awesome action figure. This One: 12 Collective Daredevil Action Figure is about 7-inches tall with over 30 different poseable spots. It comes with a display base and interchangeable heads and hands. Let's not forget Daredevil's signature billy clubs. We know he looks pretty intimidating, but don't worry about it too much. Matt is out to save the little guy. Villains, however, should be afraid. Very afraid. Daredevil doesn't quit and he won't back down until justice is served.