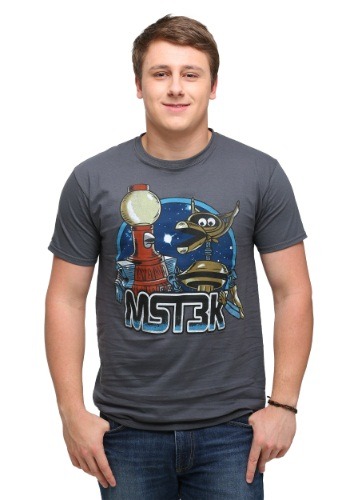 Those old movies are the best. Well, we mean the worst and the best.

We should probably explain. They're the worst in that they're cheesy with terrible dialogue, acting, and effects. Watching such terrible stuff could probably cause the average person's brain to melt. Which makes them the absolute best for ripping to shreds with commentary (also known as riffing). For, if a janitor is forced to watch such terrible movies and expected to stay sane, he'd have to riff these terrible things, maybe with the help of some buddy robots of his?

We're of course talking of none other than Mystery Science Theater 3000. That poor Joel on the Satellite of Love! Such terrible movies! Luckily, he has some great company. You can show your love of MST3K's snarky robots with this Mystery Science Theater 3000 Robots T-Shirt. It's officially licensed and features Tom Servo and Crow T. Robot with Mystery Science's proud initialism below. They don't provide their own commentary, but at least you won't be alone if you have to watch something terrible, right?