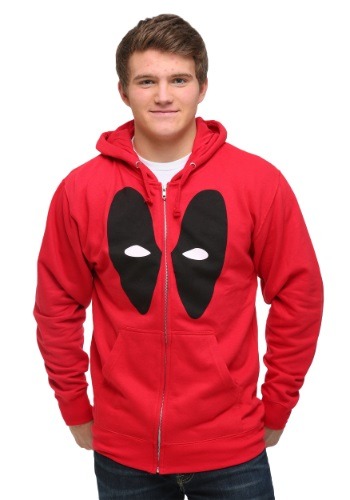 There's just one recommendation we have for wearing a sweater that captures the essence of Marvel's best antihero: having a bit of a mouth, and plenty of wisecracks at the ready. Because that's what people expect from Deadpool, who doesn't get a nickname like "The Merc with a Mouth" because he knows when to bite his tongue (and that's why we love him). So if you're ready to brave the cold with plenty of attitude and more than a little sass, this Minimal Deadpool Hoodie belongs in your wardrobe... and, well, on you!

Better than just wearing a "Deadpool" t-shirt (which is totally cool, too... we have, like, a dozen of them at home), this officially licensed hoodie is an awesome way to fly the colors of your favorite antihero. It's got his classic red-and-black color scheme, and right there on the chest, the thing everyone will recognize most: that sinister mask with those cold, probing white eyes. It's one of the coolest tributes you can make to one of the coolest comic book characters out there!