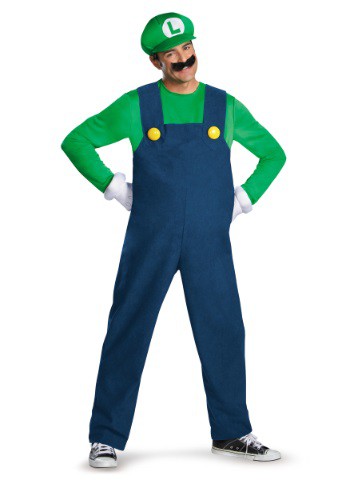 Do you feel like you’re always getting upstaged by your show-boating brother, even though you’re the taller one? Has a lifetime in his shadow left you cautious to the point of cowardice? Do they only call you up to the big leagues when he’s kidnapped by a giant turtle-dragon or otherwise incapacitated? Do you get dragged along to whatever your brother wants to do––parties, golf, tennis, go-karting––and he just assumes you’ll be into it too? Has your brother and his perfect blonde girlfriend set you up with her brunette friend and just assumed you’ll hit it off? Do you often find yourself stuck in haunted mansions while he has fun in the sun? Has he forced you to adopt his first name as your last name? Is a nice, sedate green more your color than garish red? Does your ne’er-do-well cousin even have his own subservient little brother he bosses around? If you answered yes to any of those questions, this Mens Deluxe Luigi Costume might be just for you. You could use the opportunity to recognize your tendencies and develop some of your own interests… or accept your place. You’re a Luigi for a reason.

Okay, let’s get deep on the Mario family for a second. So, you’ve got a mommy and daddy who love each other very much. Let’s call them Bobby and Betty. Their last name is Mario, but they name their firstborn son Mario anyway. Okay. Then their brother-or-sisters-in-law––let’s call them Wobby and Wetty––have a son, and name him Wario. Okay. Wobby and Wetty are a little wacky. Little in-joke for the family. Wario’s not a name, but it sounds like something that might be a name, which is where new names come from. Then Bobby and Betty have another son. They name him Luigi. Nice, traditional Italian name. He’s going to feel like an also-ran to his brother who got the family name for his first name for his whole life, but he has a real name. Then Wobby and Wetty have another son, who they name… Waluigi. Alright. We’re willing to suspend a certain amount of disbelief in a world where mushrooms make you grow and flowers make you shoot fireballs from your hands, but Waluigi is just not a name. We’re pining for a Waluigi-starring game as much as the Nintendo next fan––what could be more fun than playing as a dastardly villain, like a video game Snidely Whiplash?––but his backstory might require some explaining if they ever get around to it.

This Mens Deluxe Luigi Costume is perfect for go-kart racing, vacuuming up ghosts, or jumping over turtles (please don’t jump on turtles). Or the more mundane activities of driving your kids around, vacuuming the living room, and plumping.