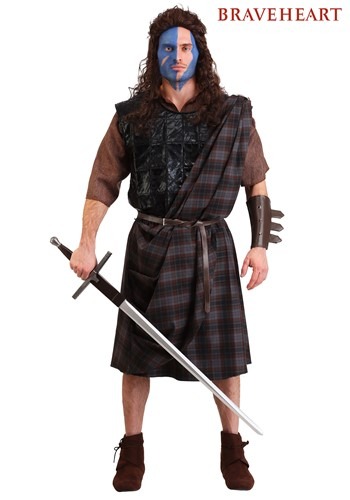 It's time for that celebration of independence. We all know what is expected. May 1st comes around honoring the treaty signed in 1328 and everyone gathers up their... oh, wait. Huh? You were thinking of the other Independence Day? Well, we can understand how that was a little confusing. Sure, there were 25-some years of war to maintain the Scottish Independence after that, we suppose... and then another far less bloody Independence in 2014...

All right, perhaps it is a bit confusing, but that's only because Scotland is a colorful place that we all have a ton of love and interest for. Why else would one of the heroes of the first war of independence stand out in our memory so strongly? Of course, that we can all agree was William Wallace. After an epic poem was written for him along with the truly epic 1995 film, Braveheart, we were all sold on this dramatic figure from our real-life history!

Since dressing up as a stained glass portrait in Stirling might be pretty challenging, you can honor both your love for the film and for Scottish history by dressing up in this Classic Braveheart costume. This is an officially licensed look put together by own team of history buffs and is sure to give you several years of fun! The costume includes an armored tunic that features rivets and black vinyl as well as matching gauntlets and a belt. The dark plaid kilt keeps you looking authentic (and pretty studly). All you really need next is to perfect that face paint!

With your iconic film look ready to go, all you need next is the Braveheart. No, we're not talking about the movie. (We assume you already have that.) We're talking about the legendary Wallace Sword that inspired the film's name. Though, that's another story entirely!

£70.99
Item # FUN2200AD | Write A Review
Coming Soon
Exclusive
Sign Up To Be Notified When Your Size Is Available
Items Included
Product Highlights
Size Chart
STXL
Inches Centimeters
Costume Sizing Tips
Product Description
Questions & Answers
There are no questions for this item yet. Be the first to ask a question!
Ask a Question
Reviews Write A Review