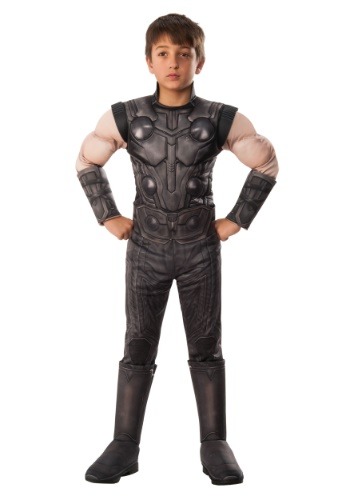 Being the King of Asgard and God of Thunder isn't all it's cracked up to be. Sometimes (actually most of the time) it involves getting your hands dirty which isn't for everyone. There's always the likelihood that the immortal purple beast, Thanos, could show up and pluck out an eyeball, which happened to Thor. Poor Thor was even enslaved by an Overlord and forced to go toe-to-toe with the Hulk, an old friend he fought alongside with the Avengers. He managed to get through the demeaning ordeal, but it also proved Thor doesn't need to wield a magic hammer in order to harness his god-like powers.

If your kid has what it takes to personify Thor, both humor and heart, he'll love suiting up in the deluxe Infinity War Thor costume. The costume modeled after the current king of Asgard will supply young Marvel fans with an epic amount of enthusiasm and confidence without running the risk of losing an eye! (We're rolling our eyes at you right now, Thanos!)

The officially licensed Marvel jumpsuit features a padded chest and arm muscles that are attached to the suit. Gauntlets on the forearms and a pair of boot covers are also conveniently attached to the jumpsuit so they won't fall off at any point throughout the evening. The costume fastens together via a hook and loop closure located in the back of the suit. The included belt is printed to match the jumpsuit and also uses a hook and loop closure in back to secure around the waist.

ROCKET TO THE RESCUE

Turn this costume into a Marvel-themed BFF costume. First, you'll need a best friend. Next, pick them up the deluxe Rocket Raccoon costume so your buddy can be the best co-pilot and your partner in mischief this Halloween. Refer to him as "sweet rabbit" as a fun and appropriate nickname.

£41.99
Item # RU641312 | Write A Review
Sign Up To Be Notified When Your Size Is Available
Items Included
Product Highlights
Size Chart
SML
Inches Centimeters
Costume Sizing Tips
Product Description
Questions & Answers
There are no questions for this item yet. Be the first to ask a question!
Ask a Question
Reviews Write A Review