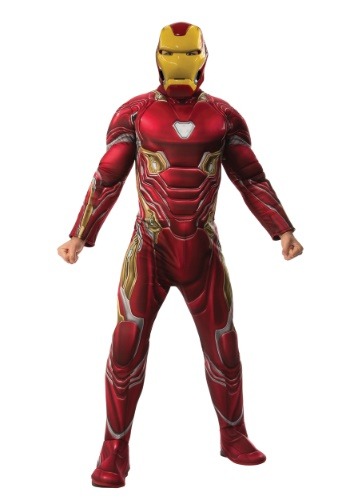 We tried building an Iron Man suit once. It turns out that without the genius of Tony Stark’s mind and some ultra-advanced technology. We’ve also yet to figure out how to make a working version of J.A.R.V.I.S. to assist us. So, instead of patrolling our neighborhood as a superhero like Iron Man, we were spending a ton of time sulking about not being a superhero… until we learned about this awesome new costume.

Now, you can become Iron Man without building your own suit. You don’t need to invent an arc reactor and you don’t need to create a J.A.R.V.I.S. of your own. You just need a confident attitude like the real Tony Stark and this officially licensed costume from the latest Marvel Avengers film.

This Infinity War deluxe Iron Man costume recreates the look of Tony Stark’s latest suit from the movie. It comes with a bright red jumpsuit that has tons of printed details. It has gold accents on the chest, arms, and legs, along with a white arc reactor on the front. It also has muscle padding in the chest and arms, so you can skip the trips to the gym to get a buff look in this costume. The legs have attached boot covers, so you can wear your normal shoes without breaking character. The final piece to this outfit is the molded mask, which has the gold and red color scheme of the helmet from the movie.

Just slip into this Iron Man costume and you can skip building your own suit. Sure, it won’t grant you any superpowers, but it will allow you to patrol your streets as Marvel’s premiere superhero. Just looking like a superhero might be enough to ward off any supervillains who might be lurking in your neighborhood.

£55.99
Item # RU820996 | Write A Review
Sign Up To Be Notified When Your Size Is Available
Items Included
Product Highlights
Size Chart
STXL
Inches Centimeters
Costume Sizing Tips
Product Description
Questions & Answers
There are no questions for this item yet. Be the first to ask a question!
Ask a Question
Reviews Write A Review