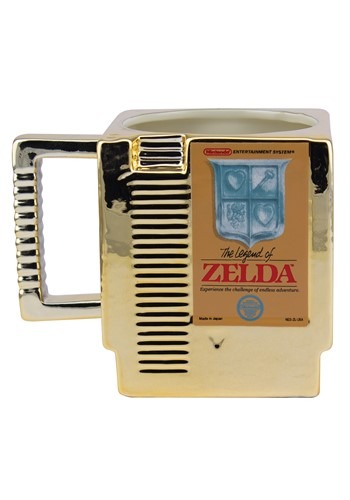 We still remember it! How could we not? There was just something magical about holding that golden cartridge your hands for the very first time. Once you slid it out of the sleeve, you just knew it was special. Other NES cartridges were a drab, gray color that looked a little something out of a cyberpunk story. But The Legend of Zelda? It was this brilliant, shimmering gold color. You were in for a video gaming experience unlike anything before.

Of course, now we've played a dozen Zelda titles and we've gotten into the rhythm of collecting the hero's bow, grabbing the boomerang, and finding the Tri-force to narrowly save Hyrule from Ganon's evil grasp... but that first time? Well, there's just nothing like it, but drinking your coffee out of the Legend of Zelda Cartridge Mug helps recapture a tiny bit of that feeling!

This mug recreates the look of the 1986 game cartridge for the Nintendo Entertainment System. It has the shimmering gold exterior, along with grooved lines along the side. It even has the classic artwork on the front. Just fill it up with your daily dose of coffee, or some red potion if you have it.