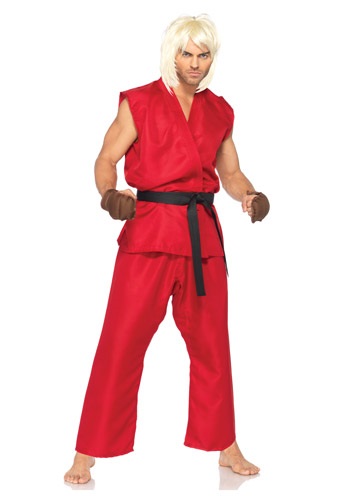 Ryu is one bad martial artist, but he’s got the personality of a big rock—stoic, quiet and a little boring. Seriously, Ryu, he can shoot freakin’ blue beams of energy out of his dang fists and he always acts like he’s in the middle of watching paint dry. Even his gi is just plain-old white. Show a little excitement and flair, will you!

That’s a problem that Ken Masters never has a problem with. You see, he has the same martial arts prowess as Ryu, but he has no problem flaunting his prowess to the world. And why shouldn’t he? He worked hard to be able to make flames come out of his fists when he performs his signature Shoryuken, so why shouldn’t he use that move at every opportunity that’s applicable? If we could do that, we’d even use that skill just to light candles around the house. And check out Ken’s gi? That bright color is something that stands out in any brawl!

Of course, we don’t know anything about martial arts, but we know a thing or two about costumes. We can’t teach you how to ignite your fists in a glorious blaze of flames, but we can at least hook you up a vibrant red gi! This Ken costume is a licensed Street Fighter outfit that will have you looking like the fiery fighter from the video game series. It comes with the red gi top with matching pants, along with a black belt and hand pads to fully recreate his iconic look. When you have it on, you might even feel ready to go a few rounds with Balrog.