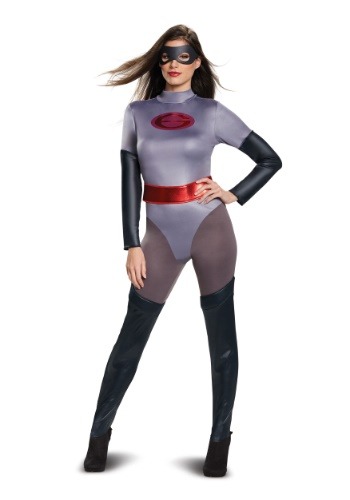 Helen Parr is really just like any average woman! She’s just trying to balance the family budget, make sure the kids grow up right, all while trying to keep her husband from getting into trouble! Every woman goes through those kinds of things with her family. Oh, and did we mention that she moonlights as the superhero, Elastigirl, in her spare time. Alright, alright. So, maybe not everything about her is average. She might be doing some grocery shopping on Wednesday, but on Friday, she’s all about kicking some supervillain butt! But then again, not everything about you is average either! Actually, perhaps you have what it takes to be a superhero, just like the amazing mama Incredible!

Of course, getting some superpowers should be the first order of business. Say, how did Helen get her super stretching powers anyways? Well, we’ll leave that question to for you to figure out! We’ll take care of the whole costume aspect of the equation. Let us be your Etna Mode!

This officially licensed Incredibles 2 Elastigirl turns you into the one and only hero from the movie! It comes with a gray jumpsuit that recreates the look seen in the Disney Pixar film. It has black accents on the legs and arms, along with a shimmering red symbol on the chest. It also comes with a matching red belt made out of foam. Of course, you don’t want to everyone to know that you’re the one and only Elastigirl, so you’d better wear the included eyemask!

Once you put all of the pieces together, you’ll look fierce enough to fight against any villain. Screenslaver, the Underminer, and even Syndrome won’t stand a chance against your heroic new look. If you need a little backup to help you out, you can always enlist your family’s help. We carry enough Incredibles costumes for the whole family.