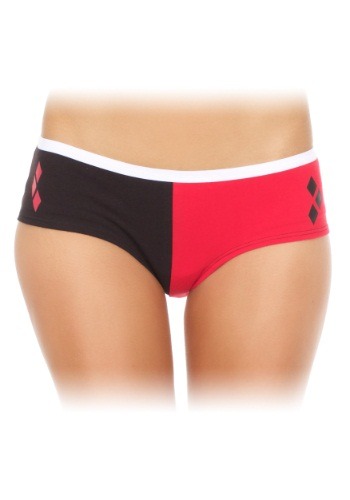 Product Description
We bet that you don't give much thought to your underwear. You just put them on every morning and head out the door. Well...basically. Of course there's other steps that are involved in the process, but one could argue that putting on underwear is one of the most important steps. It also sets the tone for the rest of the day, especially if you're sporting officially licensed DC underwear like these.

Putting on a pair of these Harley Quinn underwear won't turn you into a full-fledged psychopath, but it will make your day a whole lot more interesting. Don't be surprised if you feel more inclined to be a bit of a prankster. For example, you'll feel the urge to play the most elaborate office pranks, like taking your co-worker's mouse and plastering it with bacon or wrapping their cubicle in tin foil. These underwear, which are a blend of cotton and spandex, are perfect for fans of supervillains who are looking to be a little mischievous during their work day. The printed Harley Quinn related symbols will secretly give you the boost you need to be your office's biggest jokester!