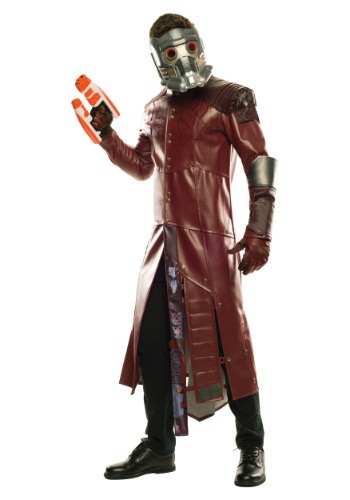 Man, we write about a lot of costumes, but there aren’t as many we want to take home and put on as much as this one. It’s just infectiously cool, like Star-Lord himself. It has everything you need to dress up as the legendary interplanetary outlaw––besides a Walkman loaded with AM hits of the 60s and 70s. For that, you’ll have to check out eBay.

This is based on the costume that Chris Pratt wore as Peter Quill in the 2014 Guardians of the Galaxy movie. Since then, Star Lord has started dressing very similarly in the comics, but previously he wore the blue military uniform of the Nova Corps, complete with a morion-like helmet. The only element retained for his film appearance was his cool rebreather mask, Star-Lord’s signature look. Star-Lord’s movie costume bears a noticeable resemblance to the costumes of heroes like Grifter, the original Sandman, and John Crichton from Farscape, and since it turned out so darn cool, it’s probably better for the changes. I mean, how can you beat a space helmet that still lets your sun-kissed locks flow freely in the breeze? With this Grand Heritage Star Lord Costume, you can look like a galactic rogue without being abducted and threatened with cannibalization by the Ravagers. You may have to work on your dance moves and smooth talk if you want to be a convincing Star-Lord behind the mask, however.

Grand Heritage costumes are of higher quality than the average Halloween costume, perfect for collectors, cosplayers, and repeated use. Get this Grand Heritage Star Lord Costume for the yourself or the Guardians fan in your life today!