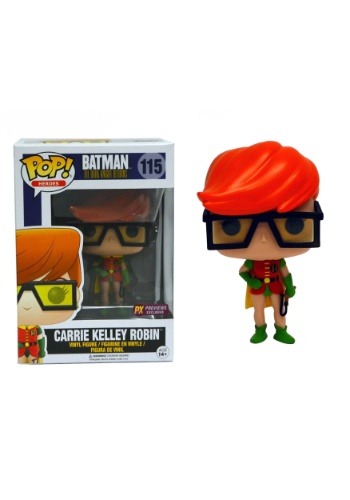 Carrie Kelly Robin? Now, we're talking! You, of course, are a serious Batman fan. Which means you hold Frank Miller's Dark Knight series in pretty high regard. Of course, that iteration of Batman wouldn't be able to do his job without a sidekick, and Carrie Kelley fills in to do the job just great. You already know all of this, naturally, which is why you're here. Okay, then, next step! Let's get you this DC Heroes Carrie Kelly Robin Vinyl Figure as the newest addition to your Batman collection!

Styled in the typical Pop! form, this Funko Pop! Carrie Kelly Robin Vinyl Figure is a slightly cartoonized version of the comic book character. With the typical Pop! oversized head! Other than that, this figure is a ringer for how she was depicted in the comics, with a Robin suit, cape, slingshot weapon, and even her signature yellow-tinted glasses. This figure stands just a tad taller than typical Pops at 4 1/4" inches tall, and comes packaged in a typical window display box. Be sure to shop our entire selection of Batman Pops to get your favorites from every series!

£8.99
Item # DCOCT158905 | Write A Review
Sale - Save 33%
Items Included
Product Highlights
Size Chart
ST
Inches Centimeters
Product Description
Questions & Answers
There are no questions for this item yet. Be the first to ask a question!
Ask a Question
Reviews Write A Review