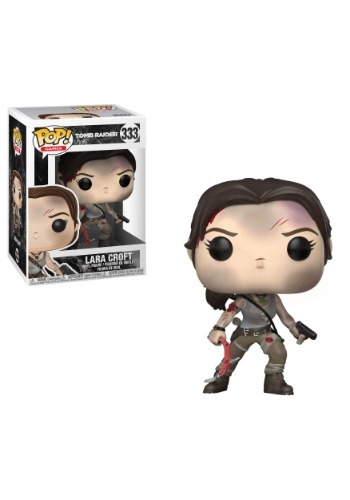 Lara Croft has been saving the day for a long time. Heck, all the way since back in 1996! Yep, that's when the video game Tomb Raider first hit the scene, and fans were all about the action. A phenomenal hit, the franchise kept putting out new chapters of the video game. And it didn't take long to get a couple movies made either! But Tomb Raider is still relevant today as 2018 brings us a new entry in the franchise. A brand new Tomb Raider movie!

We've got a new star at the helm of this reboot, Alicia Vikander, and she brings the pulse-pounding action to life yet again in this new installment. If you feel the same way we do (that it was awesome!) then there's only one thing left to do. You've got to collect some Tomb Raider stuff! Start with this Pop! Games Tomb Raider Lara Croft vinyl figure, and you'll be making a great addition to your collection.

Straight from Funko Studios, this vinyl figure comes in the classic style of their Pop! series. With seriously roughed details, the figure features dirty face stains and even bloody wounds. She's even holding a pistol and an ice pick, so you know this figure is ready for action! Standing 3 and 1/2 inches tall this figure comes in a window display box, and it's officially licensed fan gear.

£10.99
Item # FN29007 | Write A Review
Sign Up To Be Notified When Your Size Is Available
Items Included
Product Highlights
Size Chart
ST
Inches Centimeters
Product Description
Questions & Answers
There are no questions for this item yet. Be the first to ask a question!
Ask a Question
Reviews Write A Review