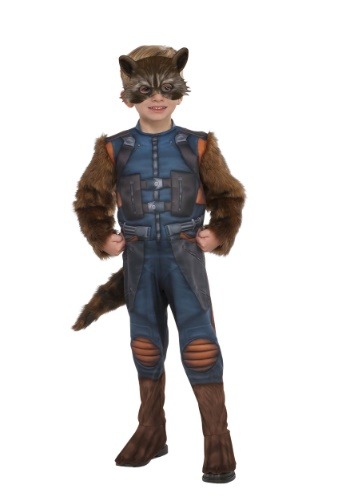 The Guardians of the Galaxy have, honestly, survived a number of conflicts that they probably shouldn’t have.  If not for their near perfect blending of a team, they would have been long gone before even managing to escape out of the first dungeon cells that they found themselves in.  Of course, in that scenario, it was the quick planning of a certain adorable Raccoon that brought about their escape.  Just don’t tell him that we called him adorable.  Apparently, he hates that.

Not that we totally blame him.  When you’re short, fuzzy, make goofy noises, or really any one of those qualities, anything you do is going to come along with that semblance of being cute.  We imagine that he’s probably just bashful about the fact.  It can’t just be that he wants to be seen as tough, after all!  Though, there is one way that we could give him a little bit of slack on the adorable line that he’s gotten himself caught up in.

And that is simply by letting the extra cute fall right onto your little one!   With this officially licensed Deluxe Toddler Rocket Raccoon Costume, your kiddo will be the perfect combo of tiny and furball that would win awards from even the snooty Sovereign species!  We begin with a jumpsuit with all over print detailing the armor that Rocket prefers and also features an attached faux fur arm and tail for the fuzzy look that we know we need.  The separate mask is printed foam with an elastic band for easy wear and features the tufted ears and ‘robber’ eyes that Raccoon is known for.  Next you’ll just need to make space on the mantle for all those adorable trophies that’ll be coming in!