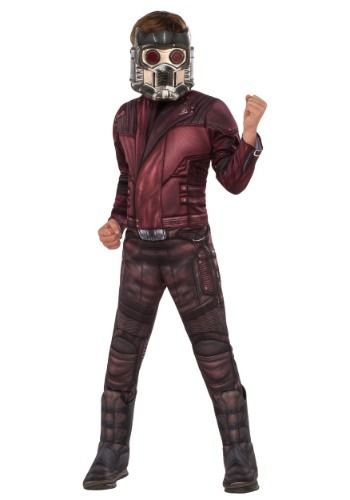 What kind of wild space pirate adventures do you think that Peter Quill took part in when he was a young lad? Yondu dragged him along with the Reavers at a mighty young age, so he must have gotten into some amount of shenanigans. Do you think he tried to steal Yondu’s fin while he was taking a nap? Maybe he likes to raid the pantry for cookies while the other Ravagers are off doing the whole space pirate thing. Did Yondu have to ground him after all of his capers or did he encourage him to act like a dashing scoundrel?

Well, now it’s YOUR turn to play Yondu to your young one, but first, you need to outfit him like Star-Lord. This officially licensed Guardians of the Galaxy costume is a great way for any kid to get into the Ravager business. It comes with a full jumpsuit that’s designed to look like Star-Lord’s costume from the Marvel movies. It also has attached foam boot covers attached to the legs, so your child can wear any pair of shoes under them. Muscle padding in the chest and arms helps your child get a muscular look without having to do an impressive workout regimen.

Of course, you might need to find a spaceship for your kid to pilot and he may need to recruit a wily crew of misfits to head out on wild adventures. Also, you might want to pick up a toy blaster or two to keep him ready for anything!