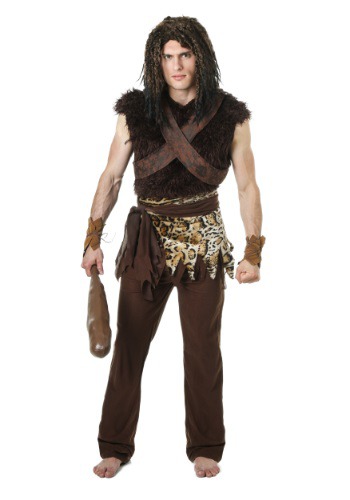 You know, it’s awfully hard to hunt woolly mammoths or saber-tooth tigers when they’ve been extinct for millions of years. So it’s a real struggle for cavemen to keep their cavefamilies well feed. There aren’t many jobs out there that hire Neanderthals. Every now and then a caveperson can get short-lived gigs at their local museums if the replicas need to be pulled for cleaning. However, standing still in a staged setting of what scientists think your home looked like is a bit degrading and harder than it sounds. That’s why we’ve taken many cavemen and caveladies in as employees. They too deserve a fighting chance in today’s society!

Grab this Adult Caveman Costume for Halloween and rock everyone back to the Stone Age. Tell people what it was really like back in the day. Some of the things that aren’t in the history books, like when you were walking alongside dinosaurs and even rode a few! You could even teach people some of those old school dance moves that really got the cave rocking.

The sleeveless shirt fastens with Velcro at the back of the neck. The pants have an elastic waistband that will guarantee a secure and comfortable fit. The included sash and belt can be tied as desired. The wrist cuffs are made with faux suede lacing ties.

When you go out in this Adult Caveman Costume you will bring the Stone Age back to life this Halloween. We would just watch out if you plan on partying near any museums. Some people may think that those pesky exhibits are coming to life again, and then security will have to be called in, and it's just a whole thing that’s better to avoid if at all possible.