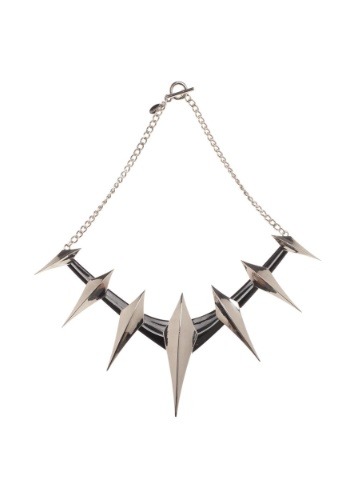 As in, this Black Panther spike cosplay collar necklace. Of course, this is just a cosplay necklace, so it doesn't store the entire Black Panther suit. And it doesn't absorb energy and power, allowing you to use it on your enemies. But it sure looks like the real deal!

Really, it's enough to get you sitting next to T'Challa when you get to his hidden kingdom. And then, maybe, just maybe, he'll even give you a real Black Panther suit. Then you can team up to battle baddies and save the day. Might be a bit of a stretch, but hey, we can dream right?

This Black Panther Spike Cosplay Collar Necklace is officially licensed by Marvel Comics. Designed to go with a Blank Panther costume, or to be worn as a comic book character inspired fashion statement, it has plenty of authentic style. The metal front piece forms a semi-circle with 7 spikes, directly reminiscent of the Black Panther costume. It secures around the neck with a 12 inch silver-tone chain that secures in the back with a lobster-claw clasp.