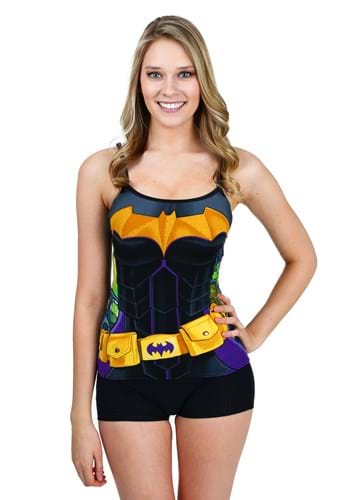 Prowl the dark alleys and rooftops of your city in style! Who said gang-busting couldn’t be fashion-forward? This Batman Costume Cami and Short Set is perfect for strutting your stuff in the streets of Gotham or curling up on the couch with your favorite Batman comic, movie, cartoon, or TV show.

Now, calling this a “Batman” cami might seem a little off. Yeah, yeah, it’s his logo and all, but we have a hard time picturing Bruce Wayne donning this outfit to dive into the indoor Olympic pool he surely has at Wayne Manor even at his playboy-doofiest. It seems a lot more appropriate for Barbara Gordon or Katherine Kane––you know, Batgirl or Batwoman. But Batman’s sort of the biggest brand name under the Bat-brella, so we get it. Just know that you don’t have to glower, live alone with your butler and ward, or drag tires around a cave to rock this awesome Caped Crusader look. You can just be your regular ol’ happy-go-lucky girly self. Or if you normally glower and drag tires around a cave, you can keep on doing what you’re doing. No judgement here.

Forget Harley Quinn and Catwoman––you’ll be Gotham City’s #1 siren and DC’s biggest bombshell in this Batman Costume Cami and Short Set. Get our Wonder Woman Costume Cami and Short Set and Superman Sequin Corset for your friends and rep the Justice League’s entire trinity of leadership! What’s cooler on a day at the beach than expressing your love of all things DC Comics?

£10.99-£13.99
Item # UGWB085269 | Write A Review
Sale - Save 66%
Sign Up To Be Notified When Your Size Is Available
Items Included
Product Highlights
Product Description
Questions & Answers
There are no questions for this item yet. Be the first to ask a question!
Ask a Question
Reviews Write A Review