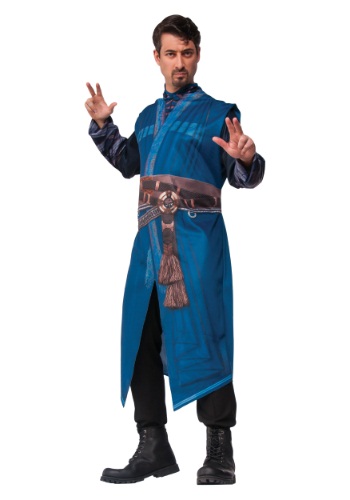 How in the world do you get to Kamar-Taj? We’ve been looking at maps, talking to travel agents and we tried asking our old geography teacher. No one seems to know, which is a bummer because ever since Marvel’s Doctor Strange movie came out, we’ve sort of been obsessed with acquiring skills in the mystical arts. And that’s sort of difficult to do when Kamar-Taj’s location is still shrouded in mystery.

Maybe you’ll have better luck at finding the ancient home of magical teachings, but first, it’s probably a good idea to have a wardrobe that shows the Ancient One that you’re ready to learn. It’s time you wore the outfit of the Sorcerer Supreme!

This deluxe Doctor Strange costume is an officially licensed costume from the Marvel movie. It comes with a blue polyester robe that has printed details on the front and back to mimic the look seen in the film. The belt is attached to the waist and ties to create a comfortable fit. Just throw it on and you’ll feel like a wizard capable of wielding the Eye of Agamotto and the Cloak of Levitation with ease!

We recommend wearing it as you attempt to track down the whereabouts of the Ancient One, or while you head to the grocery store. After all, even the Sorcerer Supreme needs to fill his pantry now and again! You’re sure to impress both the Ancient One and any supermarket cashiers you run into while wearing this.

£71.99
Item # RU820430 | Write A Review
Items Included
Product Highlights
Size Chart
STXL
Inches Centimeters
Costume Sizing Tips
Product Description
Questions & Answers
There are no questions for this item yet. Be the first to ask a question!
Ask a Question
Reviews Write A Review