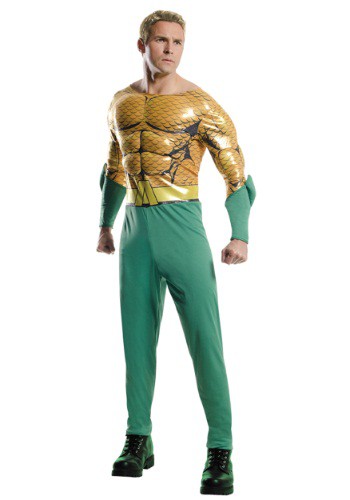 You know what? We're just gonna come out and say it. We're tired of Superman.

And Batman for that matter. What, with movies and reboots coming out all the time, we're a little burnt out. It's like they're running out of ideas or something and they can't let these superheros be, so they just keep bringing them back. Animated, live action, kids' version, dark version, and if all else fails, make them fight each other, right?

Well we're tired of it. There's a lot of other awesome superheros out there that don't get enough lime-light. Why don't they focus on them for a change instead of re-hashing the same stuff all the time? For instance. What if we finally let Aquaman get some quality screen time? Would that be so hard?

Because honestly, Aquaman is awesome. He can telepathically communicate with fish, breathe underwater, swim like a boss, and has some super strength. Apparently living in the ocean has made him so he can withstand some crazy pressure and cold, which is pretty neat.

So if you're ready to celebrate some not-overdone heroes, check out our Adult Deluxe Aquaman Costume. It's a fully polyester jumpsuit, with a foam sculpted chest and shoulders to make you look super muscular. It's in green with a gold fish-scale pattern print on the top, a printed belt, and foam gauntlets sewn into the sleeves. We're pretty sure that you'll be the new cool kid at the superhero party in this outfit. Tell the ten Batmans and fourteen Supermans we said hello.

£5.99-£13.99
Item # RU810787 | Write A Review
Sale - Save 89%
Exclusive
Sign Up To Be Notified When Your Size Is Available
Items Included
Product Highlights
Size Chart
SMLXL
Inches Centimeters
Costume Sizing Tips
Product Description
Questions & Answers
There are no questions for this item yet. Be the first to ask a question!
Ask a Question
Reviews Write A Review