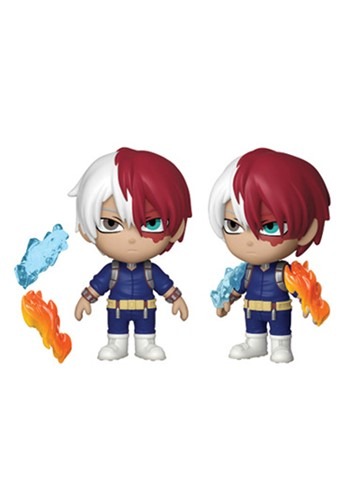 You could say Todoroki Shoto has mixed feelings. About his parents, about his powers, and about his life as a hero. Quite literally, however, Todoroki has mixed feelings in that he is physically feeling multiple sensations. Namely hot and cold simultaneously. We're sure this has something to do with his fire and ice powers. We can't imagine having half of your body freezing and half of it burning at the same time, as it sounds wildly uncomfortable. Regardless, we're impressed by his ability to wield both hot and cold, which is why he's one of our favorite 1-A students at U.A. High School. It's why we treasure this 5 Star My Hero Academia Shoto Todoroki figure. This vinyl figure is just over 3 inches tall with moveable arms and head. There are also fire and ice sleeves that snap onto Shoto's arms. This Shoto is perfect for guarding your desk or entertainment center. Don't worry, he's usually pretty chill.